Create your private tailor made trips with us 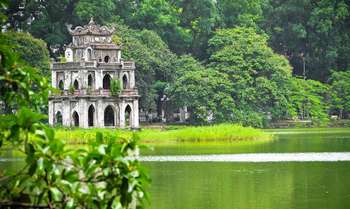 Our Authentik Travel’s tour guide and driver will welcome you at airport and transfer to Hotel in the city center.
Get some first briefing information about our country and enjoy a welcome dinner in a finest local restaurant. Overnight in Hanoi. 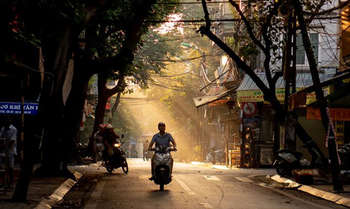 This city tour of Hanoi takes in essential sites which will commence from your hotel lobby at 08.30 am.
In the morning, you'll visit the Ho Chi Minh Complex including the Mausoleum, his former stilt-house residence, the Presidential Palace and the Ho Chi Minh Museum; The Temple of Literature - Vietnam‘s first university dating back to 1070.

After lunch at a local Vietnamese restaurant, you'll visit the Hoa Lo Prison Museum which housed Vietnamese revolutionaries and American POW during the Vietnam War; enjoy a cyclo ride for 1 hour touring through the narrow, chaotic streets of the Old Quarter - a must for any visitor to Hanoi! The day finishes with a traditional performance of the famous Vietnamese water puppets. Overnight in Hanoi.

For those who are interested in visiting the Ho Chi Minh Mausoleum, it is only open in the morning and closed every Monday and Friday. Sometimes it is necessary to queue for a couple of hours to go inside the mausoleum.
Overnight in Hanoi. 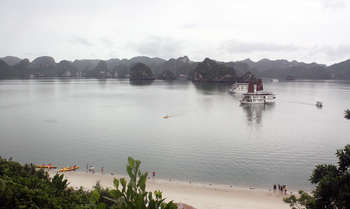 07.45 – 8:30: Our bus will pick you up from your hotel in Hanoi and start our trip to explore the most amazing bay in the North of Vietnam. On the way, we will have a quick stop at the middle of the way to rest. This also let you have a glance at Hai Duong Province and taste their traditional “Green bean cake”.
12.30: Arrive in our office at Hon Gai Pier, you will have a bit time to relax and enjoy a cup of tea/coffee. Wait for our captain to finish the registration and transfer by tender to our boat.
12.45: Enjoy welcome drink and spend a couple minutes to briefing about safety on boat and activities included then we check in our cabin.
13.30: Delicious Vietnamese set menu will be served while leisurely cruising further into Bai Tu Long Bay.
15.00: Arrive in kayaking area – that is Cap La Island. Enjoy kayaking through the karst and breathtaking nature, swimming and relaxing.
17.30: Get back to the boat and enjoys our Sunset party while our cruise sailing to the overnight anchorage.
19.00: Sumptuous set-dinner onboard.
20.30: Free time to challenge yourself in Vietnamese puzzle games, or gathers your group/family for a board game; try your luck with squid fishing or simply has a cocktail and enjoy the quiet night on the bay. 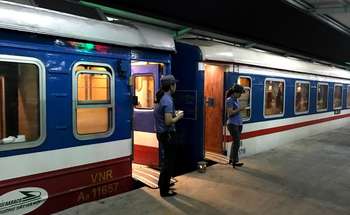 06.00: Start your day with a Tai Chi routine on sundeck or catch a morning view of the stunning bay’s landscape with a cup of tea or coffee.
07.00: Breakfast will be served in Western style, familiar to you to fulfill your strength and ready for another exploring day.
08.00: Explore the well hidden Thien Canh Son Cave.
09.00: Upon return to the boat you will have about 30 minutes to freshen up and finish packing.
10.00: Attend in a Vietnamese cooking demonstration. You can quickly learn a simple but delicious Vietnamese dish that Gordon Ramsey (a 2 Michelin Star Chef) used to guide – Nem Cuon or challenge yourself in fruit and vegetables carving.
11.00: Enjoy a traditional Vietnamese lunch on boat.
12.00: Back to the harbor and disembark in Hon Gai pier.
12.30: Farewell Halong Bay then our bus will take you back to Hanoi.
17.00: Arrival in Hanoi and take some rest before night train to Dong Hoi.
Overnight on Train 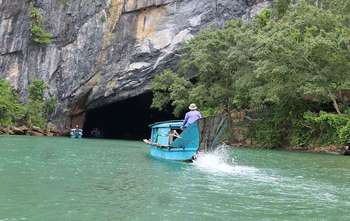 Arrival in Dong Hoi at the train station, we drive to visit Paradise cave – the longest dry cave in Asia (located in Phong Nha – Ke bang National Park’s core zone).
You will then be taken by electric car(1.6km) from the main gate through the jungle, to where you will then climb to the mouth of the cave; a climb that boasts spectacular views of the mountainous region around the cave.

Lunch at local restaurant in Phong Nha village. Here you will enjoy a traditional Vietnamese dish. Vegetarian option available
After lunch, depart for Phong Nha Cave by boat ride  along the Con River. This cave is famous for its spectacular rock formations, amazing stalatige and stalamites with many different shapes.

This cave is called a water cave as it exhibits an underground river. After going into the cave by boat, you will explore 300 meters into the cave on foot. Then walk back by boat to get back to the pier.
Overnight in Phong Nha. 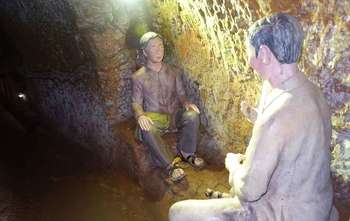 In the morning, drive to Vinh Moc Tunnels to visit the amazing network of underground tunnels built by villagers seeking shelter from bombings during the Vietnam War. The tunnels are also served a support function for North Vietnamese troops heading south and nearby islands used in providing air defense to North Vietnam. After a short break at a local café at Cua Tung beach.
Continue our journey to Khe Sanh Combat Base  & Van Kieu minority village. Keep driving on Ho Chi minh Trail, Dakrong Bridge.

Lunch in a local restaurant in Dong Ha Town. Then visit Bo De School where you can see lots of holes & fires as remaining vestiges from the war. Reach in Hue in the late afternoon, check in the hotel. Meals on your own.
Overnight in Hue. 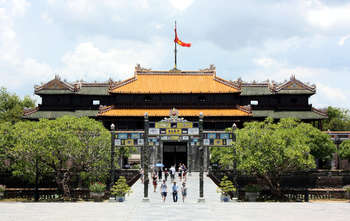 A day of discovery in the poetic Hue city which was chosen as the capital of Vietnam from 1802 to 1945.
It is also the only city in Vietnam that has been able to preserve its citadel and hundreds of temples and pagodas. It has been recognized by Unesco as a world cultural heritage site since 1993.

At 8.00, transfer upstream of the Perfume river to visit the emperor, Minh Mang's tomb, an architectural masterpiece that harmoniously highlights the nature and imperial religious works.
After that, we will voyage along the Perfume River to Thuy Bieu Village taking in the picturesque landscapes on both sides. After 1 hour, we arrive in Thuy Bieu known for its divine grapefruit trees where you can take a bike around the village under the shade of the grapefruit trees and enjoy their pleasant perfume aroma and the harvested straw. The peaceful atmosphere is in every corner of the village.
Then, visit a temple dedicated to the village protector and wonderful opportunity to stop for great photos and interact with the villagers working in the gardens and vegetable fields which should not be missed.

Lunch is served at Mrs. Loan in the village of Thuy Bieu.
In the afternoon, visit Thien Mu Pagoda,  one of the oldest pagodas in Hue, dating back to 1601. This is the spiritual highlight of the city and well known for its majestic octagon tower and beautiful view of the Perfume River.
Continue to the most anticipated site in Hue, Hue citadel, the only vestige symbol for what was once the imperial city of Vietnam. It is inspired by the fortification of Vauban. The city is composed of three parts: Kinh Thanh (the Capital city), Hoang Thanh (the Imperial city) and Cam Thanh (the Forbidden City). The most beautiful sites in Hue are concentrated in this area including the flag tower, the South gate, the palace of supreme Harmony, the Dynasty temple area and the settlement area.
Back to your hotel in the late afternoon 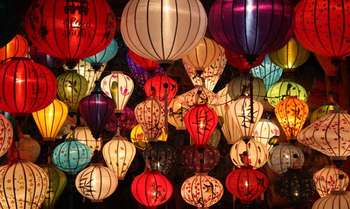 Drive to Hoi An via Mandarin Road and Sea Cloud pass (Hai Van Pass). Stop on top of the pass to enjoy the breathtaking view of the ocean and Da Nang city.
Arrive in Hoian at noon. Lunch is served in a local restaurant.

Enjoy a city tour in Hoian ancient town which is listed in the Heritage of Humans.
Some real treasures that need to be discovered are Hoian Museum, Japanese bridge, China Town, Quan Thang ancient house, the local market and the old busy port of the 15th century for the international boats from China, Netherlands, Japan, and Poland.

Finally, visit the Thang Loi silk factory, known as a good establishment in Hoian to have tailor-made silk clothes.
Overnight in Hoian 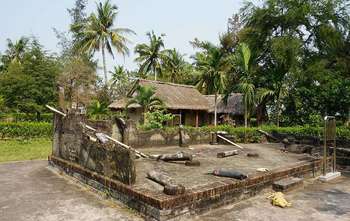 Tour departures from your hotel at 8:30 AM,  we reach to My Lai massacre after 2.5 hour driving.

We spend an hour there to see the complex of Massacre with Monument, The House of Evidence where documents, photos, and objects which testify to the massacre such as shirts, a pair of sandal of a killed child, all kinds of cups and plates, cookers and pans holed by cartridge, and wooden bells used for reciting prayers. All of them stir deep feelings in the visitors.

After the time, we enjoy our lunch before drive back to Hoian. Free time at pool or beach to relax.
Overnight in Hoian. 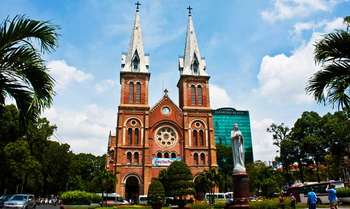 After breakfast, then meet our driver for a transfer to airport for flight to Saigon.
On arrival, get a pick up to hotel and enjoy a full day city tour: Visit the Reunification palace (or the war memorials Museum), Notre Dame Cathedral and the Central Post Office inspired by Orsay Station in Paris.

Then, transfer to Cho Lon District to discover its old quarter, Binh Tay Market and the colorful Quan Am pagoda, one of the oldest pagodas in the city. Its architecture and decorations have remained since its construction. Overnight in Saigon 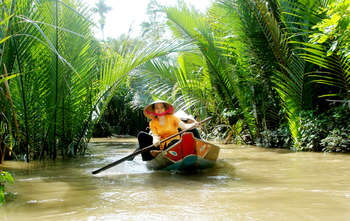 Our tour guide and driver welcome you at your hotel for your transfer to Ben Tre, a beautiful region  in the Mekong Delta River, famous for making coconut candy.
Arrive at Hung Vuong pier, then take a boat trip on the Ben Tre River to discover the daily local life.

Stop to visit the brick kiln of Mr Tu Lo and discover the craft methods of making bricks.
Next, visit the coconut factory and Continue your boat trip on a canal to Nhon Thanh Village. This will be an opportunity to taste the fresh fruits.

Take a bike ride (or Tuk tuk) on a small path through the villages and enjoy views of the coconut ranges, rice fields and vegetable gardens. A lunch of Elephant ear fish is served in the village . A short walk will help you to discover the local life in depth. This is followed by a boat ride on the small canal shaded by the wild palm trees.
Back to Saigon in the afternoon. 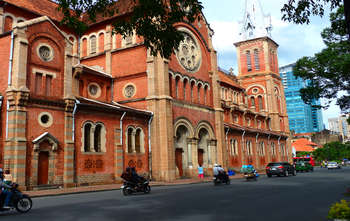 Free till meet our driver for a transfer to airport for your flight home. 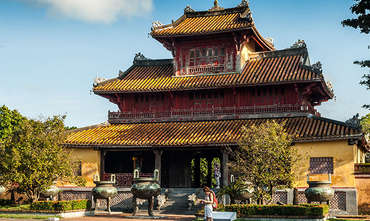 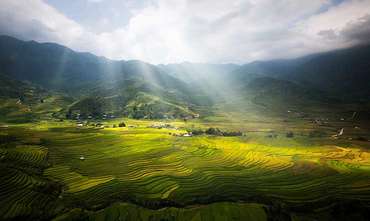 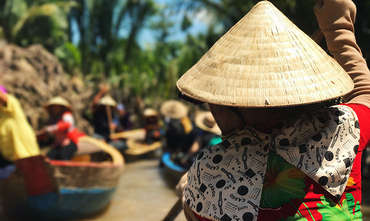 How to begin a trip with Authentik Travel?

What clients say about us?